How do you know when to stop working on a piece? Sometimes it is obvious, like when the thing you are going for has been achieved. Sometimes it is open to interpretation. Then you just have to live with the piece awhile to see if the need for more work becomes apparent or not. Other times you just don’t have a choice but to go past the end point.

A few of my paintings got damaged when transporting them to Denver for my October gallery opening because I wrapped them in plastic before the paint film was suitably dry. The plastic wrap stuck, the paint film wrinkled, and I took the damaged artwork back to my studio in dismay. The upside is that once a painting has become garbage in my mind, I am able to experiment with a freedom that is difficult to achieve otherwise. 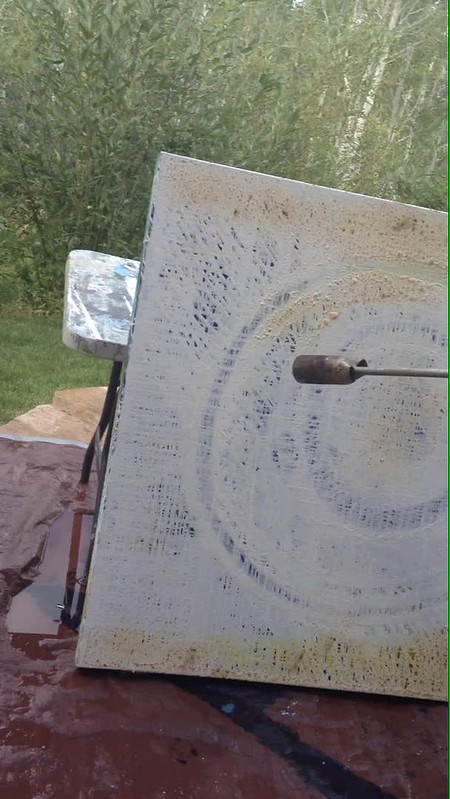 I decided to see what would happen if I burned the parts that were messed up. My torches were kind of small for the task so Brian brought over a propane tank and a weed burner so powerful that it sounds like a jet engine taking off when you light it. How exciting. What fun. In some areas the flame burned all the way through the canvas, and in others it just toasted the front nicely. I absolutely love some of the effects I am getting (I am now laying down paint with the intent of torching it later) and am wondering if I can have some burned effects that also show some distance instead of ending up with a beautifully aged and interesting but flat surface. Having nothing to lose can really be freeing.