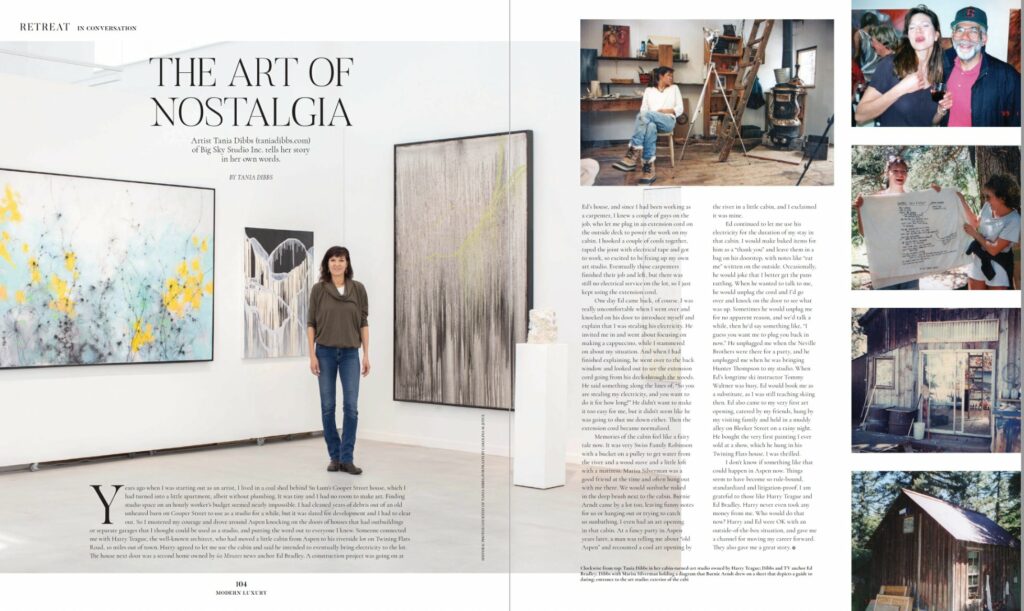 Artist Tania Dibbs of Big Sky Studio Inc. tells her story in her own words.

Years ago when I was starting out as an artist, I lived in a coal shed behind Su Lum’s Cooper Street house, which I had turned into a little apartment, albeit without plumbing. It was tiny and I had no room to make art. Finding studio space on an hourly worker’s budget seemed nearly impossible. I had cleaned years of debris out of an old unheated barn on Cooper Street to use as a studio for a while, but it was slated for development and I had to clear out.

So I mustered my courage and drove around Aspen knocking on the doors of houses that had outbuildings or separate garages that I thought could be used as a studio, and putting the word out to everyone I knew. Someone connected me with Harry Teague, the well-known architect, who had moved a little cabin from Aspen to his riverside lot on Twining Flats Road, 10 miles out of town. Harry agreed to let me use the cabin and said he intended to eventually bring electricity to the lot. 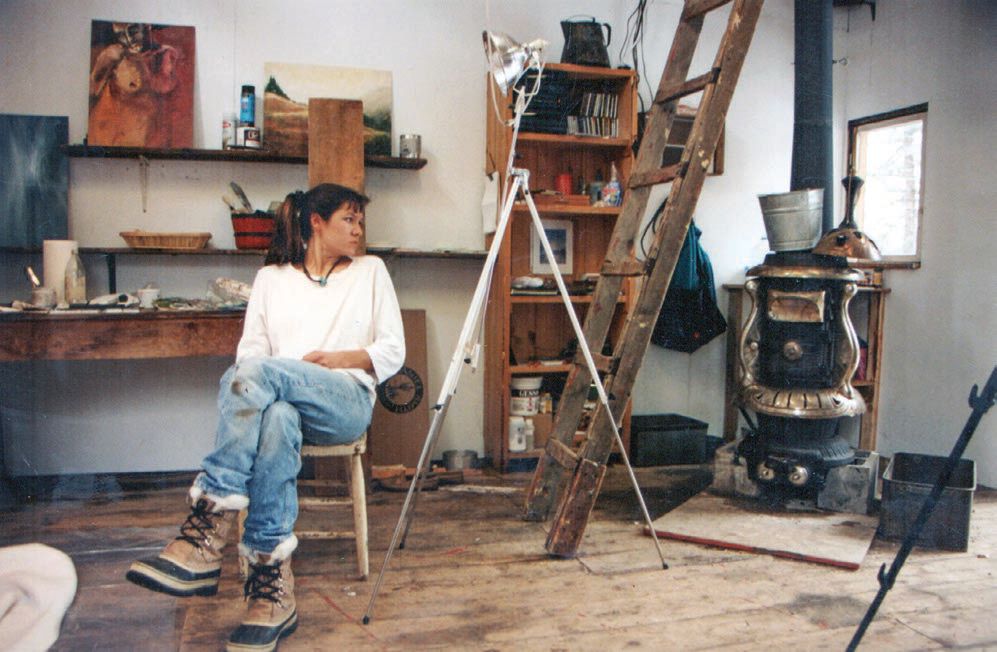 The house next door was a second home owned by 60 Minutes news anchor Ed Bradley. A construction project was going on at Ed’s house, and since I had been working as a carpenter, I knew a couple of guys on the job, who let me plug in an extension cord on the outside deck to power the work on my cabin. I hooked a couple of cords together, taped the joint with electrical tape and got to work, so excited to be fixing up my own art studio. Eventually those carpenters finished their job and left, but there was still no electrical service on the lot, so I just kept using the extension cord. 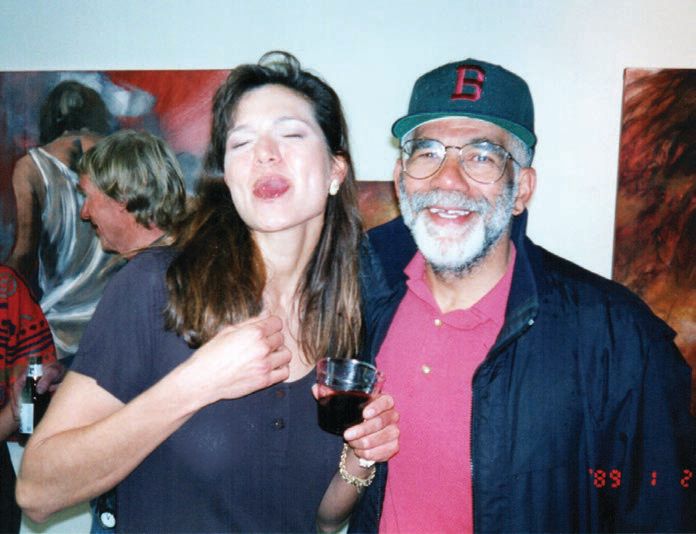 One day Ed came back, of course. I was really uncomfortable when I went over and knocked on his door to introduce myself and explain that I was stealing his electricity. He invited me in and went about focusing on making a cappuccino, while I stammered on about my situation. And when I had finished explaining, he went over to the back window and looked out to see the extension cord going from his deck through the woods. He said something along the lines of, “So you are stealing my electricity, and you want to do it for how long?” He didn’t want to make it too easy for me, but it didn’t seem like he was going to shut me down either. Then the extension cord became normalized. 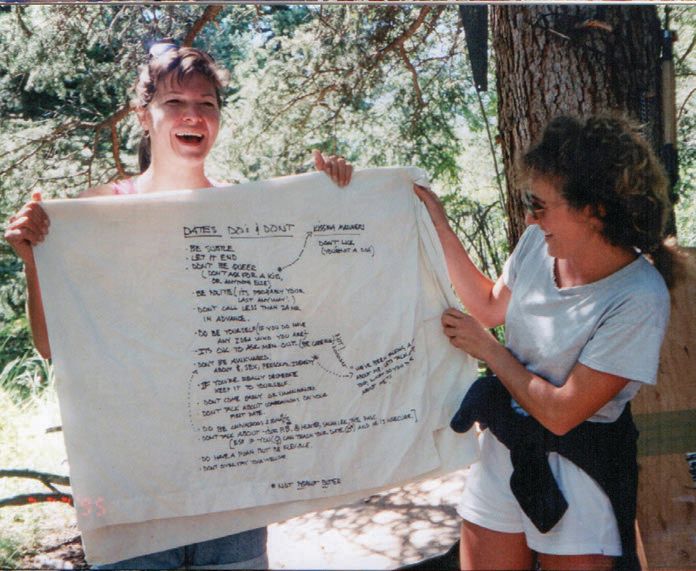 Memories of the cabin feel like a fairy tale now. It was very Swiss Family Robinson with a bucket on a pulley to get water from the river and a wood stove and a little loft with a mattress. Marisa Silverman was a good friend at the time and often hung out with me there. We would sunbathe naked in the deep brush next to the cabin. Burnie Arndt came by a lot too, leaving funny notes for us or hanging out or trying to catch us sunbathing. I even had an art opening in that cabin. At a fancy party in Aspen years later, a man was telling me about “old Aspen” and recounted a cool art opening by the river in a little cabin, and I exclaimed it was mine. 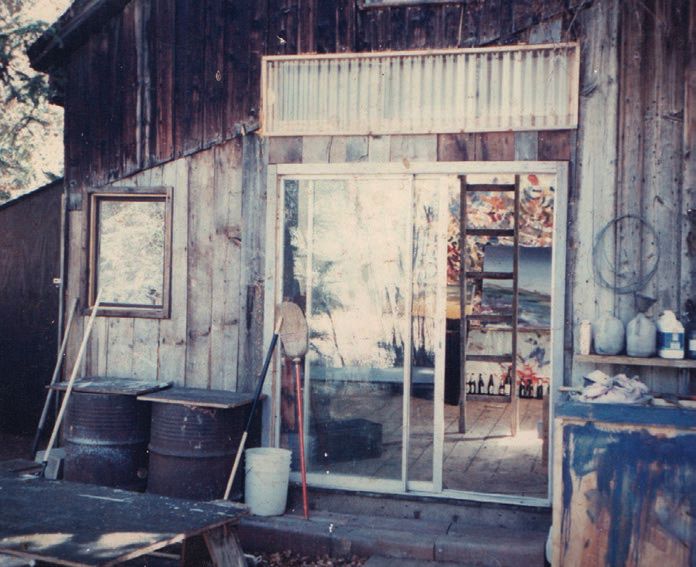 Entrance to the art studio

Ed continued to let me use his electricity for the duration of my stay in that cabin. I would make baked items for him as a “thank you” and leave them in a bag on his doorstep, with notes like “eat me” written on the outside. Occasionally, he would joke that I better get the pans rattling. When he wanted to talk to me, he would unplug the cord and I’d go over and knock on the door to see what was up. Sometimes he would unplug me for no apparent reason, and we’d talk a while, then he’d say something like, “I guess you want me to plug you back in now.” He unplugged me when the Neville Brothers were there for a party, and he unplugged me when he was bringing Hunter Thompson to my studio. When Ed’s longtime ski instructor Tommy Waltner was busy, Ed would book me as a substitute, as I was still teaching skiing then. Ed also came to my very first art opening, catered by my friends, hung by my visiting family and held in a muddy alley on Bleeker Street on a rainy night. He bought the very first painting I ever sold at a show, which he hung in his Twining Flats house. I was thrilled. 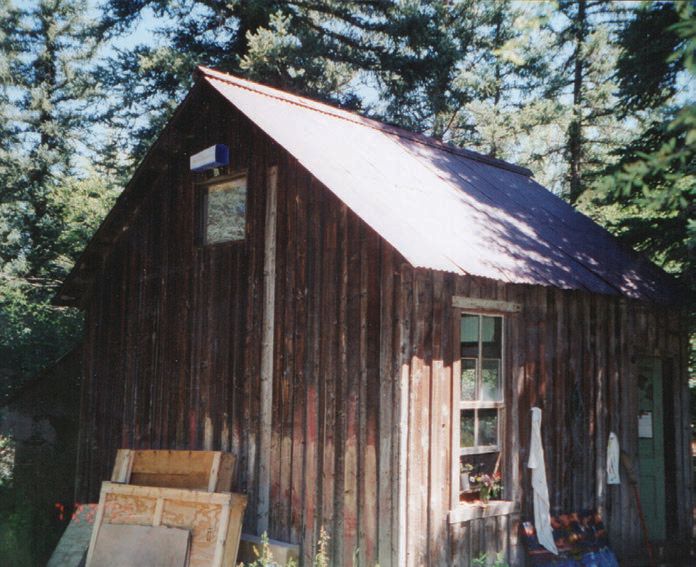 Exterior of the cabin

I don’t know if something like that could happen in Aspen now. Things seem to have become so rule-bound, standardized and litigation-proof. I am grateful to those like Harry Teague and Ed Bradley. Harry never even took any money from me. Who would do that now? Harry and Ed were OK with an outside-of-the-box situation, and gave me a channel for moving my career forward. They also gave me a great story.